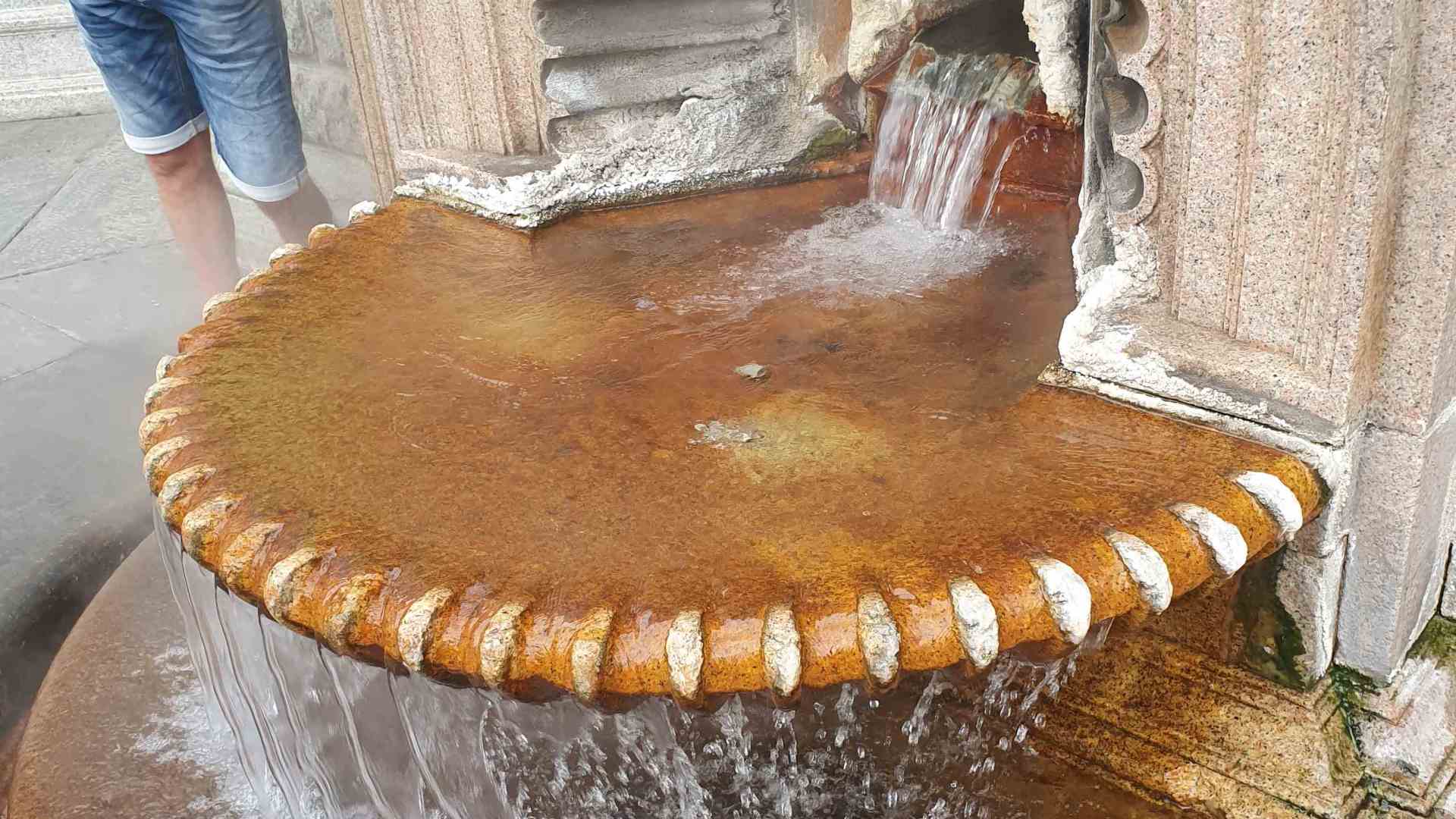 I pretty much chose our hotel tonight by putting my finger on a spot half way between Nice & our destination at Lake Como – and ended up with an amazing adventure in Acqui Terme, Italy!

Acqui Terme means thermal waters. In the center of town, there’s a hot spring, 165 degrees F! Larry and I could smell the sulfur and see the mist before we saw the water fountain. I felt the heat as we walked up.

We were gawking and quickly dipping s our fingers in the hot water, when a gentleman started talking to us about the history and geography of the aquifer that feeds the springs. This nice man, Leonardo, gave us a tour of the old town.

We visited the Enoteca Regionale, beyond the site of the old city gate and draw bridge The cave is a huge warren of arched brick rooms. We were offered a generous taste of the “typical” wine of the Piemonte (“Piedmont” in English) region, “Brachetto.” It’s a sweet desert wine. (And we bought a couple of bottles.)

Leonardo continued his tour by taking us inside two churches.

The older Badilico de San Pietro, or Peteris tucked tightly into a piazza, del Adolorata and has its own bell tower. It was built between 989 and 1018. It has served a Benedictine convent.

At the Cathedral, dedicated to the assumption of Mary, we were lucky enough to get to see the intact “Trittico Di Acqui.” The exterior shows the annunciation in monochromes. The tryptich is opens like a cabinet to reveal the large central panel painted about 1485 by Spanish painter, Bartolome Bermejo (Rubeus). The Virgin, Mary is holding the Infant Jesus. There’s the portrait of the kneeling donor, Francisco Della Chiesa, and a bird on a string that Jesus is holding. 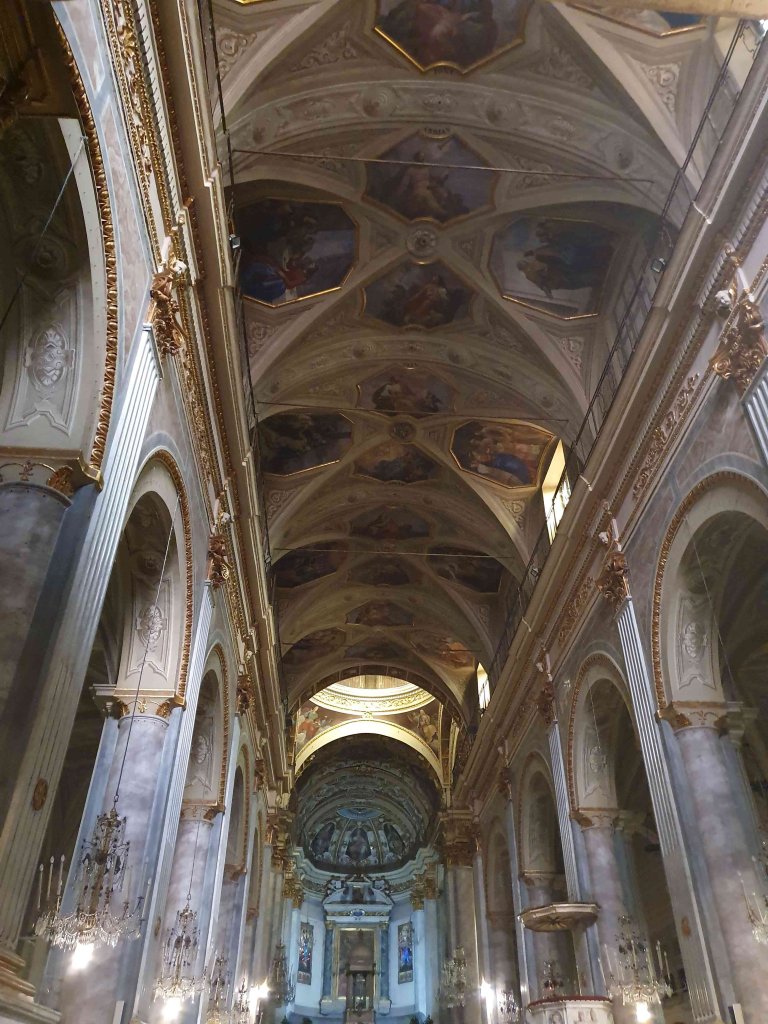 We also saw another city gate,

The church of San Antonio,

And the clock tower that rings at the hour and half hour,

We just have one night in Acqui Terme, but I think we’ll be back! 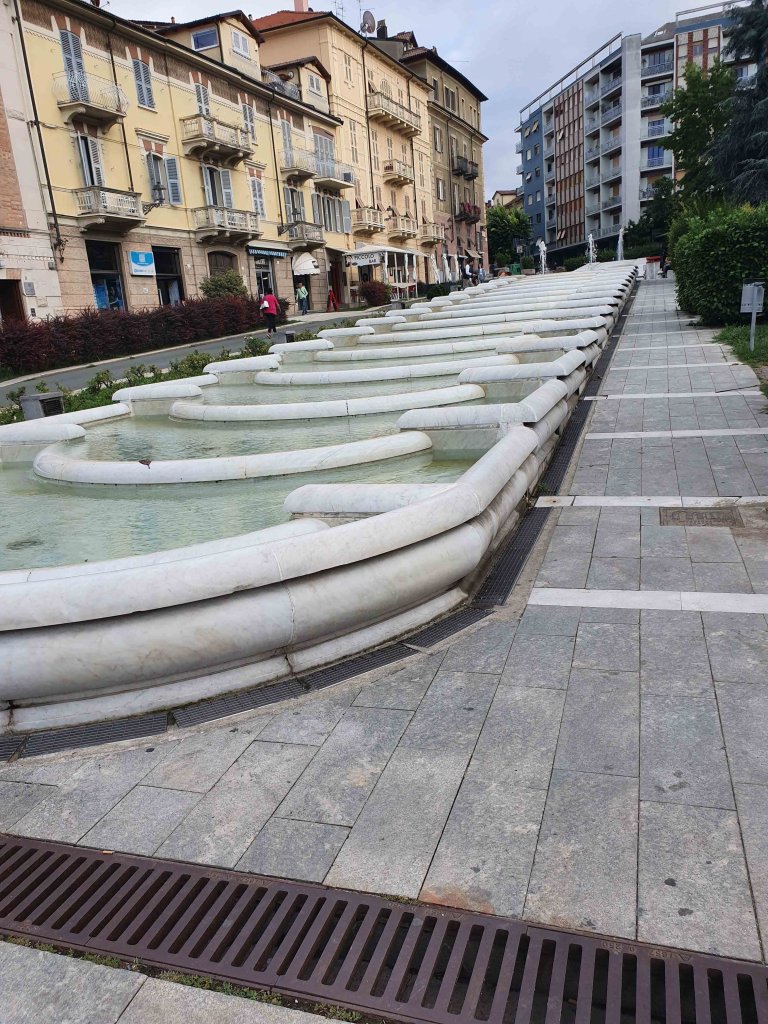